Michael Stanley is a second generation Island potter, having grown up with parents Christine, a weaver and Malcolm, a potter who together operate Stanley Pottery & Weaving in Breadalbane.
Michael served his apprenticeship in the family studio between 1999-2004 where all studio production was signed Stanley, PEI along with the year.
Opening his own business, Scorched Earth Pottery in 2004, his work was signed Scorched Earth PEI between 2004-2008. Most of the work was for the wholesale trade during this period as well as a certain amount of raku work. In 2009 Michael entered the retail trade when he opened his Charlottetown studio, first on Richmond St. and then relocated to 89 Water St. in 2011. He operated under the name Michael Stanley Pottery, which is currently (2020) located in Victoria-by-the-Sea, PEI. His Facebook page is called Michael Stanley Pottery and he uses a potter's mark that is based on a tree of life image he created himself. 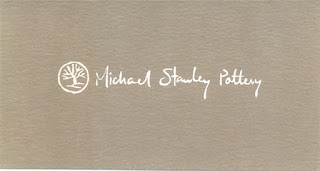 The pottery of Alicia Kate is marked at time of writing (2020) with the location marks of NB, PEI and NS, as well as the potter's mark, Ali Kate. The Facebook page indicated that

"All of Alicia Kate Pottery Company’s pieces are hand crafted by Alicia Snair, in Amherst, Nova Scotia. Please message for prices and orders!"

Alicia Kate has connections to all three Maritimes provinces and has chosen to mark her pottery with three location marks - while clearly indicating that she is based in NS currently. As this blog is to assist pottery collectors with identifying work marked PEI or made in PEI, we have included Alicia Kate Pottery Company. 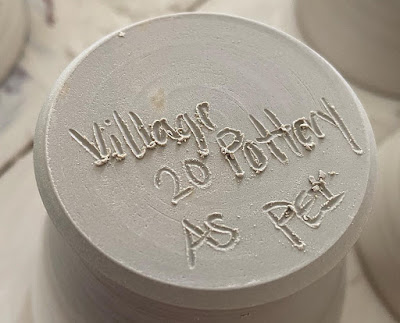 Alicia also makes pottery for Village Pottery in New London, PEI. On that pottery she marks with initials AS as well as Village Pottery, PEI and the date in the form 20 to indicate 2020.

An excellent article on Mary Shumate, with pictures is included on the Artisans on Main website. The text is copied below.

As a child I loved making mud pies.  When I got the opportunity as an adult to “play in clay” I felt right at home.  I love the feel of the smooth clay under my fingers as the wheel turns, and in the end the clay is formed into a useful shape.  I tend to be a “functional” potter, so I look for ideas that can be used to create functional rather than strictly decorative pieces.  Some of my work is thrown on the wheel and some pieces are made from slabs of clay.  But the focus is always to make something useful and useable.

All my pieces are stoneware which is oven, microwave, and dishwasher safe.  The glazes are food safe.  I’m always playing around with new glazes, but I have three that I use consistently. They are my standard.

My first pottery class was at Community School in Belfast, PEI in the late 70’s.  I loved it so much that I took an evening pottery class at Holland College.  At that time I didn’t pursue the pottery because of family and time constraints, so I put pottery on the back burner while we raised our 8 children. Meanwhile, we moved to Kingston, Ontario, where I enrolled in pottery classes and became a member of the Kingston Potters Guild, soon to be on the Executive and participating in their semi-annual sales. We moved back to the Island in 2012, and I was happy to find an outlet for my pottery.  Having something like pottery to make helps pass the long winter months as I prepare stock for the summer sales.

Peter Krauskopf's early career as a potter (1977-1987) is covered under the entry for his prior business Mud Puddle Pottery.  After retirement from a teaching career (1987-2013) which had a continued creative focus on both theatrical/musical arts, as well as visual arts, Peter returned to his creative interests in both pottery and painting.

Peter is active in both the PEI Crafts Council and Artisans on Main, which operate co-op craft galleries on PEI. A biographical article on Peter provides background material.  The full article includes extensive photos and the text of the article is archived below:

Peter grew up in New York City area and attended City College of New York studying Theatre and Art as a combined major, specializing in Set Design and Directing.  After graduation he traveled in Europe for six months, sketch book in hand.

Upon returning, Peter moved to Canada and attended Simon Fraser University earning his B.ED. in Education.  After, he moved to Vernon B.C. and taught for three years.

In 1977, he moved to Prince Edward Island and worked as an Artist in Residence in many island schools, teaching Art and Pottery for a number of years.  He also owned and operated his own Art and Craft business, Mud Puddle Pottery, for ten years in Mt. Mellick and Belle River. At this time he was a member of the Prince Edward Island Craft Council, the Nova Scotia Designer Craftsmen, The New Brunswick Craft Council, and exhibited and sold pottery for many years in adjudicated fairs. He also was selected for the One of a Kind exhibition in Toronto.

Peter returned to teaching in the PEI school system in 1987 and continued until his retirement in 2013.  He taught Art and Crafts as well as Theatre at Colonel Gray High School for twenty years as well as directed and designed the sets for ten musicals at Confederation Centre of the Arts in Charlottetown.  He continued to exhibit and sell his work through the Island Craft Shop and the P.E.I.C.C. craft fairs until 2000.  Presently he is also selling at Vermillion Art Works and Northern Watters, in Charlottetown.

Peter lives and works in Orwell Cove P.E.I. and draws inspiration from the island he loves.

"My love of painting really started with my mother who was an amateur painter and a lover of Art and Theatre.  Living in New York, we would frequent the museums and stages, viewing in these places the world’s greatest artists.  At a very young age, I began to draw and paint. Attending university, I majored in Theatre and Art, intending to work in set design, which relied on architectural types of drawings.  When I completed school I toured Europe.  While in Amsterdam I viewed the Van Gogh exhibit and saw “Crows Over Wheat Field”.  I spent an entire day mesmerized by that painting, which is quite a small piece of work.  I never before realized that texture and colour in a painting could literally jump off the canvas and catch me by the throat. That painting changed forever my approach to my own work which to this day, is still a work in progress.

Nora Lewin studied at Holland College School of Visual Arts in Charlottetown during the 1980's when Ron Arvidson was the pottery instructor. She established a pottery in Victoria, BC, and at the time of writing (2020) is an active potter.

While on PEI she signed her work Nora, with the initials PEI and included the year.

Her work is featured on the Go BC website and her contact information in 2020 was:
Pottery by Nora, Nora Lewin
2816 Wyndeatt Ave, Victoria, V9A 2L8, British Columbia
write email   Open:
People are welcome to visit my studio at 2816 Wyndeatt Avenue in Victoria. Please call ahead to make sure we are home - 250 383-4734.

Judy Cheverie produces clay art under the name Funk & Stuff Pottery. She has been an active member of the PEI Potters Studio Co-operative for a number of years.

Her work includes sculptural work as well as functional work. She signs her work with her name - Judy Cheverie and the year. 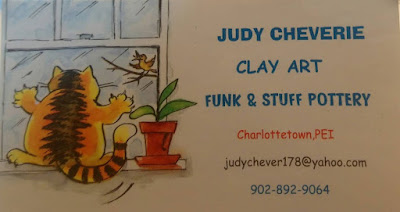 The Facebook page for Loft Studio states that they represent "the modernist art pottery & fine art by Chris Robinson. Why not sip ur coffee from a funky elf's-ear mug instead of that old Walmart cup?! Also SN lithographs."


The location is listed as 8537 Cavendish Rd. in Cavendish, PEI


The rack card circulating in 2019 call the business The Mad Potter of Cavendish likely a homage to the popular and quirky TV series Cavendish than launched in January 2019.


It also indicates that the pottery uses scrafitto and shellac resist designs.